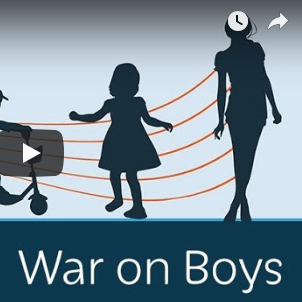 What ever happened to letting “boys be boys?”

Take these two cases: In one, a seven-year-old boy was sent home for nibbling a Pop Tart into a gun. In another, a teacher was so alarmed by a picture drawn by a student (of a sword fight), that the boy’s parents were summoned in for a conference. In short, boys in America’s schools are routinely punished for being active, competitive, and restless. In other words, boys can no longer be boys. Christina Hoff Sommers, a scholar at the American Enterprise Institute, explains how we can change this.

Christina Sommers is an American author best known for her critical stance on late 20th-century feminism and controversial writings about feminism in contemporary American culture. She believes that the contemporary feminist movement has taken a wrong turn toward victim politics and male-bashing. She is a resident scholar at the American Enterprise Institute.

Gaming to Re-engage Boys in Learning

No comments yet. Why don’t you start the discussion?