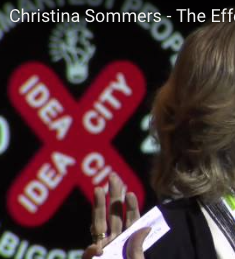 “If boys are in trouble, it’s a women’s issue – we’re all in trouble.”

Christina Sommers talks about the effects of a philosophy that can be somewhat hostile to young men: Women’s Rights. Advocating for recognition of gender differences while maintaining equality, Sommers discusses the implications, risks, and consequences of consistently supporting and encouraging females only.

Christina Sommers is an American author best known for her critical stance on late 20th-century feminism and controversial writings about feminism in contemporary American culture. She believes that the contemporary feminist movement has taken a wrong turn toward victim politics and male-bashing. She is a resident scholar at the American Enterprise Institute.

The Myth of Laziness

No comments yet. Why don’t you start the discussion?