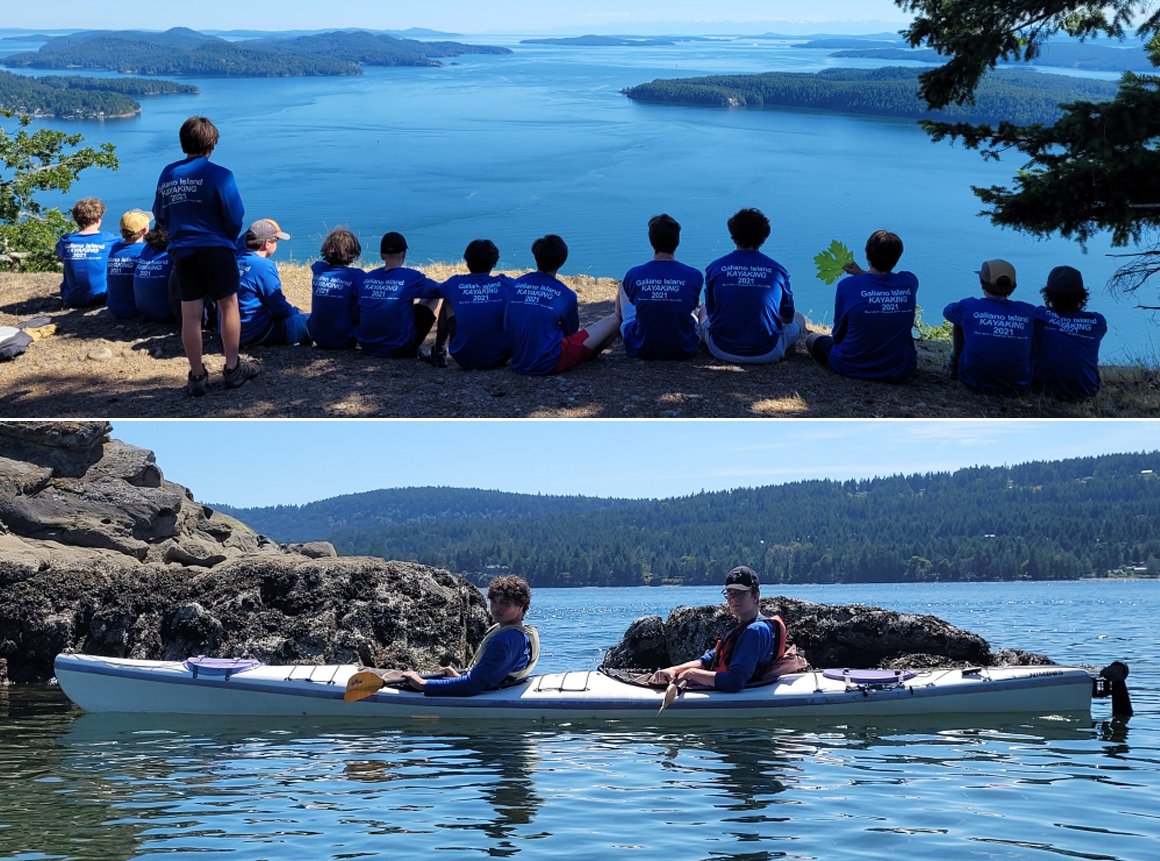 In June 2021, North Point School For Boys embarked on an outdoor education adventure on Galiano Island, located on the west coast of British Columbia in the Gulf islands. The drive out was split up into two trips with a short stay in Abbotsford, we then took the ferry over to Galiano. That’s when we saw a humpback whale! That afternoon on day two we were introduced to our kayaking guides Ben, Christina, Paz and Anastasia who showed us the basics of kayaking. The boys’ kayaks were around 12 feet long and had space for two, the boys kept the same kayaks the whole trip and sometimes traded partners in search of good balance. The paddler in the back controlled the rudder for steering and the paddler in the front assisted in paddling and spotting rocks or high ground. One of the more challenging aspects of kayaking was preventing the boats from bumping into each other or hitting rocks. They are made from fibreglass or kevlar so this was important to learn. In the 6 days of kayaking we circumnavigated 4 islands (Wallace, Charles, Parker, and Wise), and explored the west coast of Galiano island in high tide, which had a great view of the beautiful Arbutus trees and many coastal cabins, and in low tide, which had great opportunities to see sea stars, sea cucumbers and sea anemones.

On day 4 we went for two hikes, one of them was called the Bluffs and the best part of that was seeing the ‘grandmother tree’ which was a massive Douglas fir which was well over 100 years old. The other hike was Mt. Galiano hike which had stunning views of the south and west surrounding islands and even the mountains in Washington State.

Some of the best times of the trip were exploring around our campsite during free time. The boys would head down to the beach and chase crabs, skip rocks and take very cool sunset pictures. Chasing candy-hungry racoons in the evenings quickly became a favorite activity for the boys too, (but I think the racoons won!). Time spent around the fire was very special as the boys learned important survival tips and several jokes from the teachers. Some of the boys’ favourite meals were french toast and tacos!

Altogether the trip was an astounding success, and North Point is very lucky to have Mr.Redick plan out all the details and logistics (no leftovers!) of the trip. The boys slept most of the ride home but woke up fast when they realized 3 Jr. High teams were also at the same hotel in Kelowna. They played in the pool most of the night ( how they had the energy is beyond me! ), and ate a ton of food at Denny’s –breakfast for dinner!. The ride home had a significant delay on the highway and we had to call in for water since the temperature was so high.

These trips have important lessons beyond the highlight activity of kayaking. The boys should always remember that food in the tents invites wildlife that can ruin your sleep, medical emergencies require water taxis ($$),  showing up on time for a ferry is key, tip your restaurant staff, call McDonalds ahead for big food orders, provisions and diligent planning when driving through the mountains is important, and respect/gratitude for others and their land when you’re in their province is tantamount. Thanks to all the parents that supported this adventure and asked important questions in the planning process in order to build the best possible experience. Look forward to UTAH 2022!!!!